I read ‘The Boy who was Raised as a Dog’ (TBWWRAAD) on a family holiday this year and I found that I really wanted to talk about it. Strangely though, apart from one animated discussion about the fact that people will always speak English with a foriegn accent if they learn it after puberty, I was unable to generate much enthusiasm for Dr Perry’s insights.

I can understand a reluctance to talk about childhood adversity and trauma whilst unwinding on holiday, of course, but this isn’t a depressing read. (I also refute the charge that it was ‘a work book’.) It is actually about the extraordinary courage, the survivorship and ultimately the recovery of traumatised children, when they are held by attuned adults.

TBWWRAAD urges readers to reach out to vulnerable children in the sure knowledge that small acts of kindness make a difference. It’s about relationships over referrals, love over diagnostic labels.  The key message is a galvanizing, a democratizing one because it is essentially that we can all help children recover from trauma, through simple human connection and kindness. The implications of this are massive – for schools, for service design and delivery, for families. It’s something all of those who come into contact with children need to be talking about.

Undeterred by the family fail, I therefore tweeted that it would be great to start a conversation with interested readers and from that our book-study group was born.   We met for the first time last week at the HQ of Think2Speak in Gainsborough. A social enterprise that aims to enable helpful conversations, this provided the perfect context and it’s where the group will continue to meet monthly.

Mostly, we wanted to get to know each other a bit and talk about ‘Tina’ (Chapter One) but we also needed to agree how best to share any implications for practice: Dr. Perry is clear that school has the potential not only to heal but also to further harm traumatised children. There is a strong moral imperative, therefore, to share the knowledge. Especially as we are in the realm of biological fact here.

We agreed that we would blog about each of Perry’s patients (this is the first attempt), produce an info-graphic of the key messages (good luck with that one Mel) and design a model PSP for each school-aged child. The PSP will be co-constructed each time we meet; a way of sharing best inclusive practice between us and also of translating some of Dr Perry’s insight into a practical resource for educators.  Future posts will follow the format below and there will be ten of these, one for each of Dr. Perry’s subjects. The aim of the posts is not to cover each chapter comprehensively but to pull out those elements that have clear implications for school policy and practice.

Just seven years old when he started working with her, ‘Tina’ was Dr. Perry’s first child patient and he describes the panic of feeling inexperienced and out of his depth on their first encounter.  Tina had been sexually abused by a babysitter over a two year period. A year later, she was presenting in school as disruptive, aggressive and inappropriately sexualised and had been referred to the clinic by her mother, Sara.

Dr. Perry worked with Tina for a period of three years, beginning by simply lying next to her on the floor and colouring with her. Through the child-directed games that they played in the weekly sessions that followed, Tina learned new concepts, like waiting, taking turns and thinking before deciding what to do next.

He concluded from this that whilst he had helped Tina learn appropriate behaviours to avoid getting into trouble, he had not succeeded in addressing the trauma that was at the root of her difficulties. His examination of the neuroscience of developmental trauma, through which he developed better tools than he had at his disposal for Tina, is in essence the subject of TBWWRAAG.

It is fitting that one of our group is Callum Wetherill because he leads the Lose the Booths  campaign. Tina’s story and tens of thousands like it raise grave concerns about the undifferentiated use of punishment, or ‘consequences,’ in our schools. It doesn’t need a child psychologist to work out that punishment – the use of power to do something unpleasant to another human being – can re-traumatise survivors of abuse.  Tina avoided this as a primary aged pupil but we will never know how many older victims, acting out their distress and their profound mistrust of adults in secondary schools, spend hours in isolation booths. We do know that sexual abuse is very common and mostly never reported. We must hold in mind then that behavioural difficulties (I prefer ‘distress’) are a reason to be curious and compassionate, not judgemental and punitive. 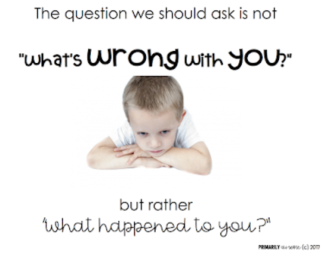 The book is in many ways a celebration of neural plasticity. The brain fires and wires throughout the lifespan but the rate of change during childhood is little short of miraculous. That’s why, with the right stimulus from Dr. Perry, Tina very quickly developed skills that were lagging as a result of her developmental trauma. (The impact of trauma on executive functioning will be covered later, as one of the book’s key themes.)

However, too often, when the response to distressed behaviour is rigidly behaviourist, children are not given the necessary stimulus for new neural connections to be made. Rather, pressure is applied in the form of rewards and sanctions aimed at encouraging ‘better choices’. This futile, stress-inducing manipulation only results in school discipline becoming a traumatic experience for children who need help to grow skills, not sanctions for lacking them.

Dr. Perry describes two very different experiences of supervision in this chapter. ‘Dr. Stine was a complacent traditionalist and his advice about Tina went as follows: “She is inattentive, a discipline problem, impulsive, non-compliant, defiant, oppositional, and has problems with her peers. She meets diagnostic criteria for Attention Deficit Disorder and oppositional defiance disorder.” Dr. Perry wondered how a Ritalin prescription could possibly solve Tina’s problems and left feeling confused and disappointed. In his other supervisor of that time, however, he found a liberating mentor; one who encouraged him to challenge traditional disorder-thinking and to ask what had happened inside Tina’s rapidly developing toddler brain during the period of horrific sexual abuse. Dr. Dyrud’s focus was never on medicalising ‘symptoms’ but on identifying their roots.

SENCOs and families might be inclined to believe that referrals to paediatricians for diagnostic assessment are in the best interests of children, but this is clearly not always the case. As one of our book-study members has witnessed on many occasions,  accompanying families for assessment, diagnosis never takes into account environmental factors, it is undertaken by a stranger to child and family, and it is very quick. Substantial evidence about the widespread misdiagnosis of trauma as psychiatric disorder is now available. It represents a therapeutic catastrophe for children because it locates the problems ‘within child’ and the solution in drugs. No amount of medication is going to heal trauma. Only relationships can do that.

As already suggested, the great theme of this book is relationships. Every chapter can be viewed as a take on this biologically incontrovertible conclusion:

Schools are huge sources of what Dr. Perry refers to as ‘relational wealth’ – and therefore huge sources of healing, when that potential is harnessed. Clearly, in his early work with Tina, he hadn’t made this  breakthrough in understanding and invested too much hope in one-to-one clinical intervention. Whilst Tina gained much from the sessions, there was certainly growth, they were not up to the task of freeing her from the powerful grip of early trauma.

Only in retrospect did Dr. Perry understand the essential role of ‘therapeutic dosing’ in recovery. Here is how he explains that phenomenon:

Just as a traumatic experience can alter a life in an instant, so too can a therapeutic encounter. Unfortunately, in order for positive ‘doses’ of interaction to lead to long term change, much more repetition is needed. Consequently, the pattern and spacing required to ensure long term maintenance of any therapeutic change is going to require a density of therapeutic interactions that our current mental health model of fifty minutes once a week cannot provide. For children like Tina to truly benefit from therapy, it needs to be embedded in a context of safe and positive interactions.

The good news is that anyone can help with this part of “therapy” – it merely requires being present in social setting and being, well, basically, kind….For people who have been sexually abused, like Tina, just being acknowledged in a supportive, respectful and non-threatening way aids healing. The more we can provide each other these moments of simple, human connection – even a brief nod or moment of eye-contact – the more we’ll be able to help heal those who have suffered traumatic experience.

The implications of this for school policy and practice are enormous. A population study found that half of children in England have experienced one childhood trauma and one in ten have suffered four or more. These are our ‘high risk’ children – high risk of permanent exclusion, of poor mental and physical health in later life, of addiction, of suicide, of stunted lives. (For an excellent public health animation about the impact of trauma on outcomes, see here.) Sometimes as educators we are aware of children’s adverse experiences out of school but often we are not.  So we need to ensure that our schools develop as caring communities in which all children can flourish. We should be prepared to target support when we can – for me, reminders that Pupil X is in need of compassion are entirely appropriate – as a classroom teacher, I know that I would have gone out of my way to offer my own form of ‘therapeutic dosing’. Some pupils may need additional time with a key-adult, a daily meet and greet, more relational opportunity than is generally available during a busy school day, without adjustments. But kindness needs to be standard, so that no child slips through the compassion net simply because their struggle is hidden. This needs modelling by SLT and pupils themselves also need to be taught about the transformative impact they can have on one another. (For ideas about how to create social capital, there is no better source than Paul Dix’ When the Adults Change. )

Consequences may be necessary because of course boundaries must be enforced to keep everyone safe. But when these consequences are arbitrary and puntive rather than logical – when they take away the very stuff that children need to bounce back  from adversity – then they become unethical. We need to move in closer to distressed children  – not marginalise them through exclusion or through the withdrawal of relational experiences, such as playing for the school team, going on the trip, attending the prom. We must at all costs avoid the Matthew Effect of sharing more of ourselves with children who are already relationally rich and shunning the relationally poor because they seem hostile, having not yet learned to trust adults. Tenacity is required, perseverance, deliberate effort – and love, never forgetting that ‘the children who need the most love ask for it in the most unloving ways’.

All welcome – either virtually, via a Zoom link, or in person. We will be discussing Chapter Two.

Those attending the inaugural gathering (and thank you so much for doing that) please do use Comments below to note anything that I may have missed from our discussion. I know I haven’t covered it all!