Why an assembly on behaviour, fairness and trauma?

Lincolnshire is one of a growing number of LAs promoting trauma-informed practice in schools, and leaders – some already well well ahead on this agenda – are extremely receptive to the conversation. However, a concern that is often articulated relates to ‘consistency’. How can we be both trauma-informed and consistent? If there is not a consistent application of consequences, as per the behaviour policy, then pupils will surely be confused by mixed messages, resentful of the perceived unfairness, parents may complain and a view that the school has gone soft on behaviour could cause reputational damage.

My personal view is that we tend to underestimate the emotional intelligence of our young people, their acceptance of diversity and their capacity for compassionate understanding when we make these assumptions. We must also model acceptance of diversity, emotional intelligence and compassion, as adults, and the crudest application of consistency doesn’t allow us to do that. In relation to children with a disability recognised by the DDA, such as ADHD, reasonable adjustment is of course a legal requirement anyway – so we are merely extending that established practice to include  those who may not have a diagnostic label but who are equally if not more disadvantaged. However, setting those observations to one side, I do see the need for including pupils as well as staff in awareness-raising work around trauma and the assembly (or PSHE lesson) that I’ve scripted below is a stab at that. It’s aimed at secondary-aged pupils because the consistency question is most often raised by secondary colleagues; there’s a modified primary version here.

The assembly is also an attempt to help those impacted by trauma (in every school, a significant proportion) to feel less shame, less confusion and to move towards a place of hope, self-understanding and acceptance. (Not that a single assembly or lesson will ever do that, but it’s at least a start if pupils have never had the opportunity to learn about these things.) I am grateful to Beacon House for much of the content. Survival-In-Secondary-School

The assembly  – what fairness means to us 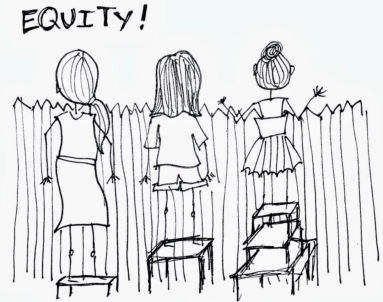 Today’s assembly is about fairness, or equity, as it’s called in this image. You will know how it feels to be treated unfairly because it happens to us all sometimes. It’s one of the worst feelings in the world and I personally hate it. That’s why at this school we do try very hard to treat you all fairly, even though it might not always seem that way.

Fairness is rarely a straightforward thing, that’s the problem. It sounds simple but it’s not. Look at the picture. The girl on the left only has one low stool whereas the girl on the right has three piled on top of each other. Unfair, surely! Why should she have more stool than her friend? Well of course you can see as well as I that it’s not actually unfair at all because all of the children need to see over the fence and the one on the right couldn’t do that without the extra help. It’s not her fault she’s short and the fair thing to do is clearly to give her some additional uplift.

Now we need to think about this in relation to behaviour because the way we deal with incidents here does sometimes raise the fairness question. It’s only fair that we talk about that.

It’s perfectly obvious that most of you need very little help with your behaviour at all. You can stay calm and focused on learning without the need for an extra stool. For others, it’s equally clear that staying calm and focused is harder. We all feel stressed out sometimes of course, and we might say and do things we regret – put someone down, lash out, storm off, argue, shout. But when it’s a lot of the time that we feel overwhelmed and out of control like this, then something is not right. After all, nobody wants to be upsetting people and in trouble all of the time – there’s nothing to gain from it and lots to lose. Nobody would choose to spend hours and hours in detention – there are so many more things you could be doing with that time. So we must take excessive acting out as a sign that an extra stool or two is needed. 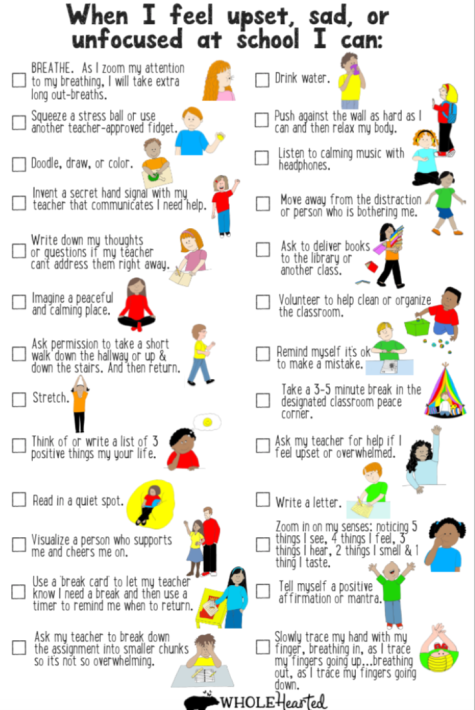 You may have noticed that the extra school comes in lots of shapes and sizes at this school, because fairness and safety are big values for us here. Sometimes it is one-to-one time outside the lesson with a mentor, sometimes it’s a reduced timetable, sometimes it’s a morning meet and greet, sometimes it’s leaving class a bit early to avoid the busy corridor, sometimes it’s permission for a brain-break, or a homework holiday, sometimes it’s just being able to have a walk around outside and breathe deeply. These things and more are needed to help some individuals to see the view over the fence, to stay calm and regulated.

You may be wondering why it is that some people need so much more support to stay emotionally regulated than others. It’s hard to understand when you have no such difficulty yourself. There are actually many reasons for this – thousands of books written on the subject – but I want to share one key reason with you.

It starts with understanding the brainstem. This is the part of the brain that grows first. When babies are born, the rest of the brain – the higher parts – they aren’t wired up yet. 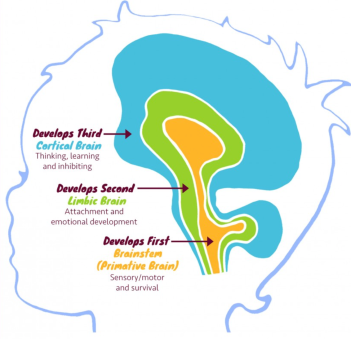 The job of the brainstem is to protect us from danger  – keep us alive. So we never lose it, even when we’re older and the higher parts of the brain have fully matured. The brainstem is a bit like an alarm inside our heads. It tells us when to run away from danger, to fight or to freeze when we think we may be under attack. Think about the last time you surprised someone. How did they react? Some people may turn away or back off – that’s flight. Others might might move towards you, even look angry – that’s a fight response. Others might just stand there speechless and shocked – that’s freeze. These reactions are the brainstem doing its job of keeping us safe, even when we are not really facing a life-threatening danger.

The problem is, when we grow up in a situation that feels unsafe or scary or really stressful  for a lot of the time, then the brainstem is constantly activated. This is our brain making sure we survive threats – but is also means that the lower part becomes dominant and the wiring up with the higher parts of the brain is delayed. That does change with the right help – the brain has an amazing capacity to rewire, throughout our whole lives. It’s never too late to recover from what we call relational and developmental trauma. But until that recovery process is complete, young people will be much more prone to survival flight, fight or freeze responses.

You will all be able to think of occasions when someone has kicked off over what seems to you a really small thing, like an accidental push or a look. That’s the brainstem at work. Young people with survival brains can’t just leave them at home and plug in the thinking one at school. It’s not biologically possible. So we must expect to see survival behaviours, until the person has learned that school is actually a really, really safe place full of people who can be trusted and who pose no threat.

That takes time  – brains don’t reshape overnight. So while the process is underway, we have all of those stools that I talked about – and we have you, as kind and understanding people. You can be part of someone’s recovery, just by being there, even after a setback. (There will be setbacks) 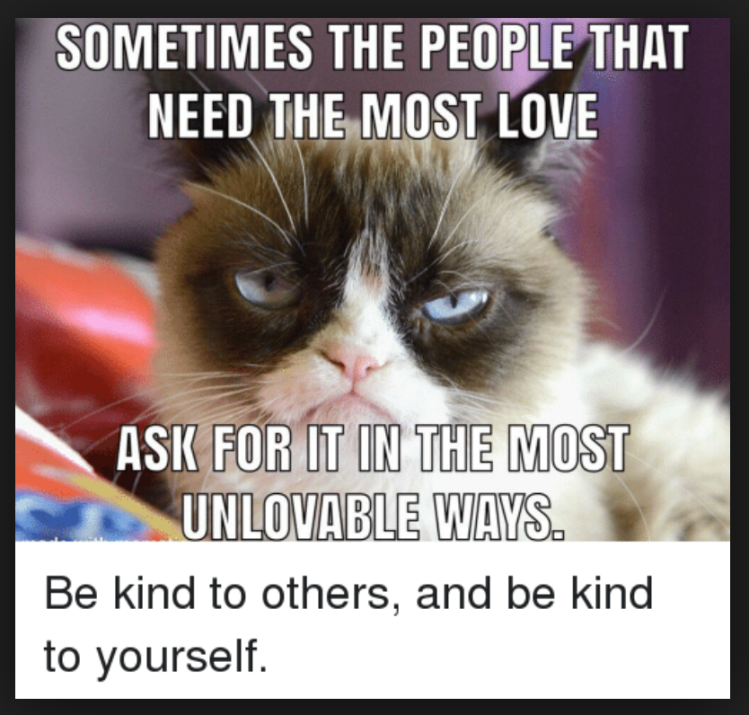 We should all try to help if we have the personal skills to do that because a life lived in survival mode is much more distressing to experience than it is to observe from the outside. The next few slides explain what it feels like from the point of view of a student: 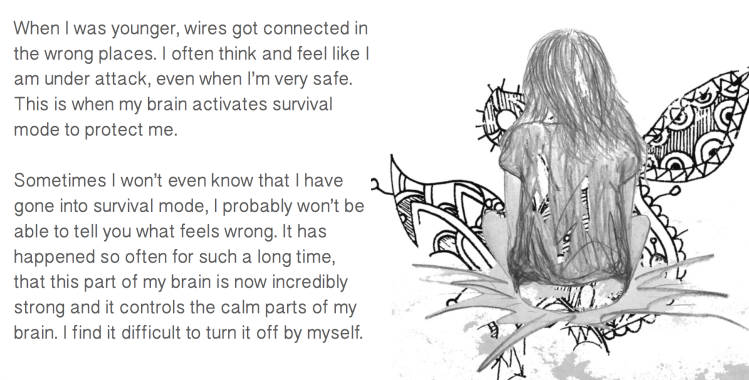 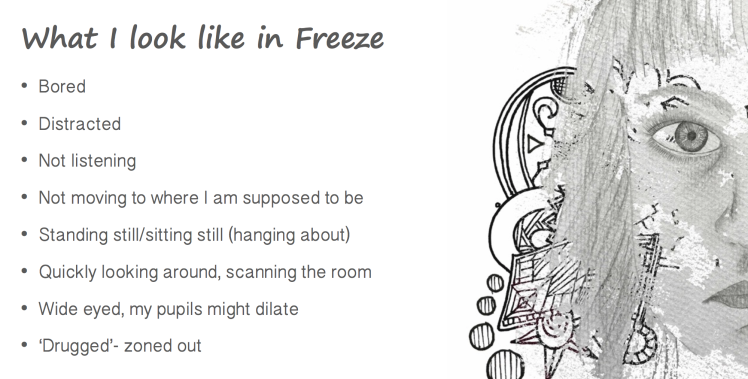 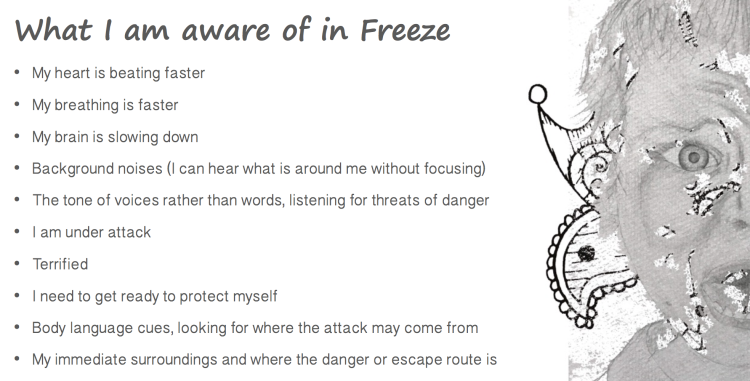 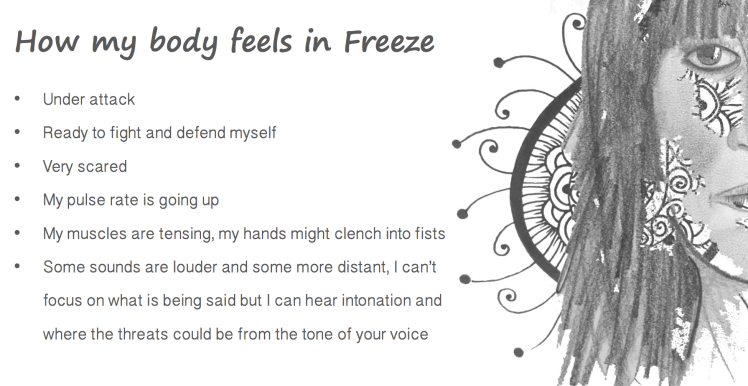 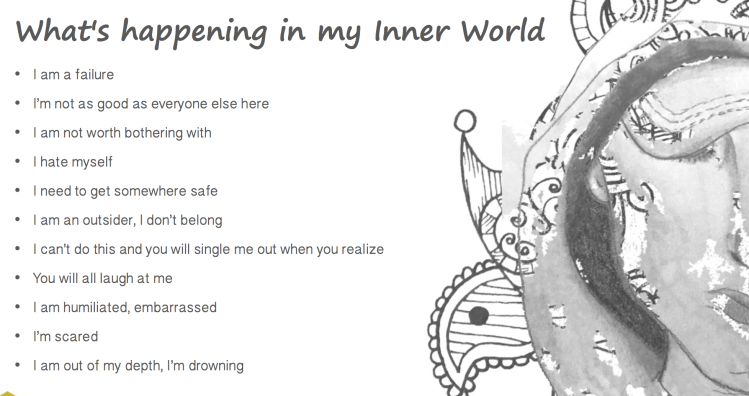 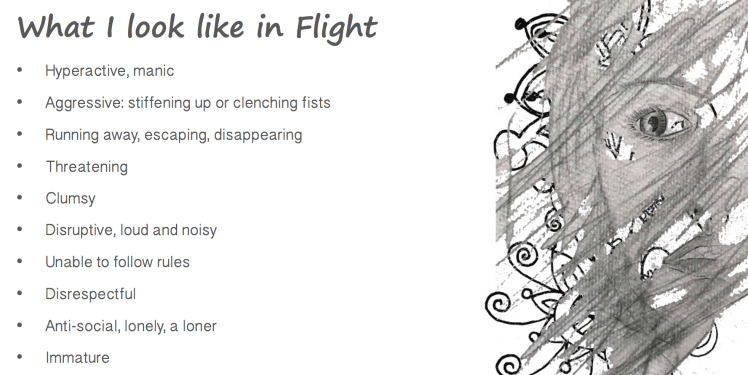 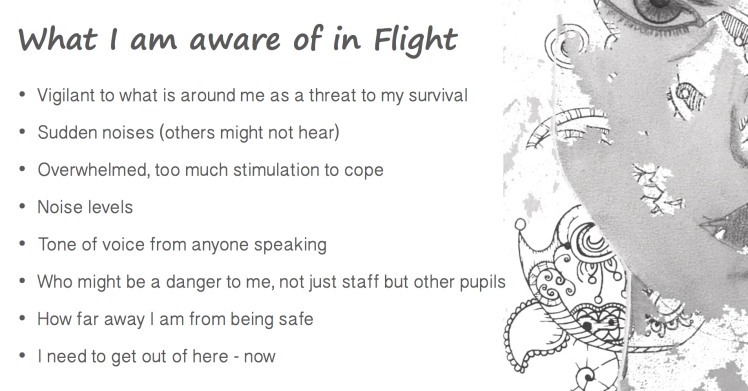 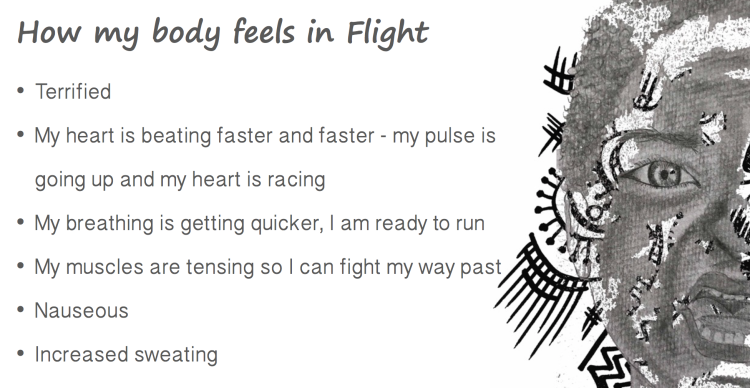 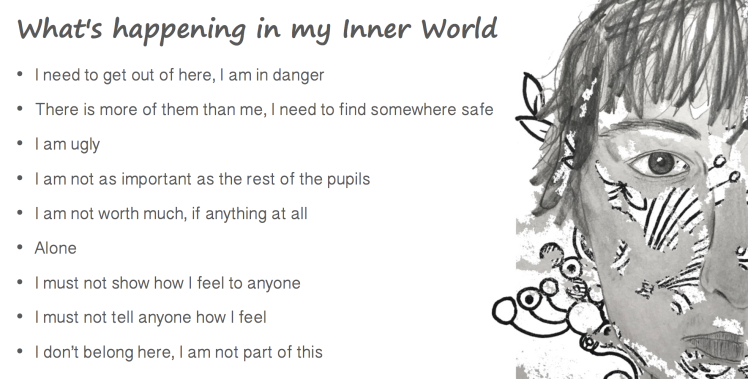 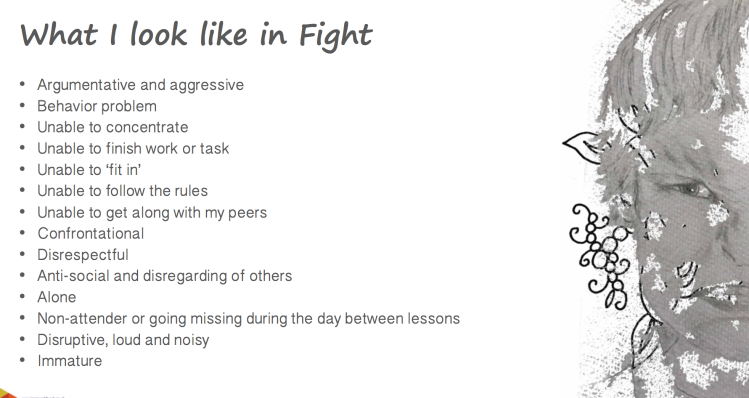 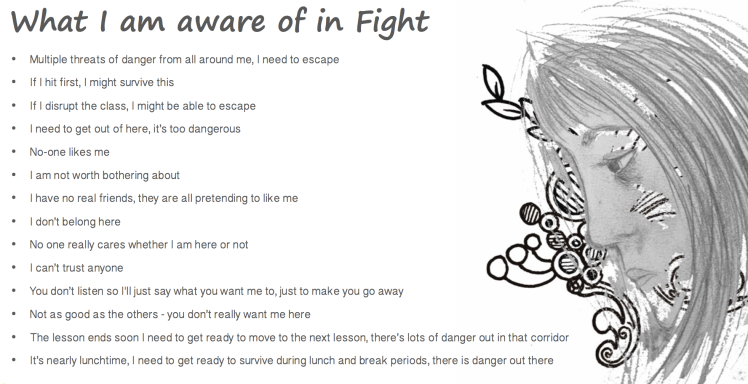 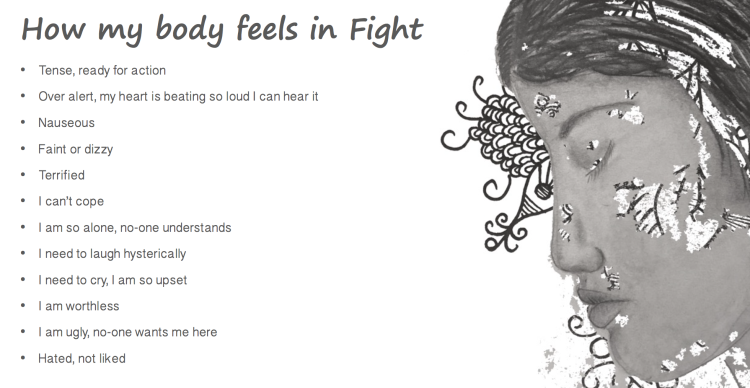 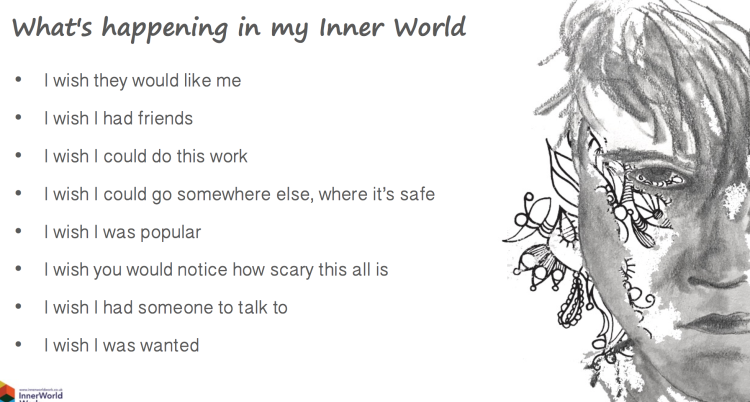 A painful place to live then.

If you recognise any of those feelings in yourself or if anything that you’ve heard today has made you feel like you want to talk to somebody then you must do that – and you know that we will listen. We can talk to parents and carers about this stuff too – because it’s really important.

Lets finish on fairness though. It really isn’t fair that some children have to grow up feeling frightened or deeply insecure or unloved.  It’s not fair that their survival brains make it hard for them to regulate their emotions. We have to have rules here to keep you all safe. We have to tell you when behaviour is not ok. And when behaviour is not ok, when it’s unsafe or hurtful, then we have to intervene. But that intervention will take many different forms because you are all different, your needs are all different. So don’t worry about comparing, trust us with our decisions and we will trust you to really think about today’s assembly, to avoid judging others and to be curious and compassionate instead. 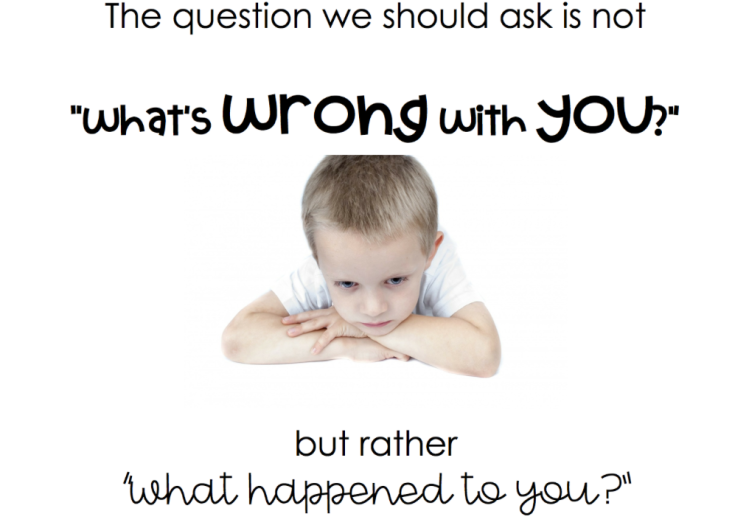 2 thoughts on “An assembly about behaviour and fairness #trauma-informed”