I was still working in a high school at the time of the 2015 Paris attacks. I wrote an assembly and shared it on Twitter. A number of people found it helpful so I’ve adapted it to apply to Manchester. With the two events horribly similar, this wasn’t difficult. The assembly begins with a personal anecdote, but anyone who is a parent or simply knows a child will be able to substitute their own. Children are fearful and I think as teachers we have a duty to give them a sense of perspective, as well as to protect those who might be vulnerable within our school communities, in the febrile aftermath of an atrocity.

It dawned on me just how terrifying the world can seem to the young when I was travelling on a train to York with my 11 year old daughter. She was unusually quiet, eyeing our fellow passengers when normally she’d be busily Minecrafting. Finally she blurted, “How do we know there’s not a bomb on the train?” I asked her to explain. “Well nobody checked our bags before we got on – like they do in airports. So there could be a bomb on this train.”

A quick smartphone search and I was able to advise her that the odds of us dying in a terrorist attack on the 10.15 from Newark to York were approximately 9.3 million to one. For some context, and because she loves dogs, I reassured her that our chances of dying from a dog bite were greater, around one in 700,000 poor souls suffering this fate.

Unfortunately, these impressive facts didn’t do the trick. Josie remained a coiled spring and was on the platform at York before I was even out of my seat. This saddened me – I don’t want any of my children or indeed any of you to be irrationally frightened of the world, or worried about something so thrilling as travel. It was therefore a relief to find online some better advice than mine, from an expert in childhood called Fred Rogers. Remembering his own fears as a boy, he wrote these words. 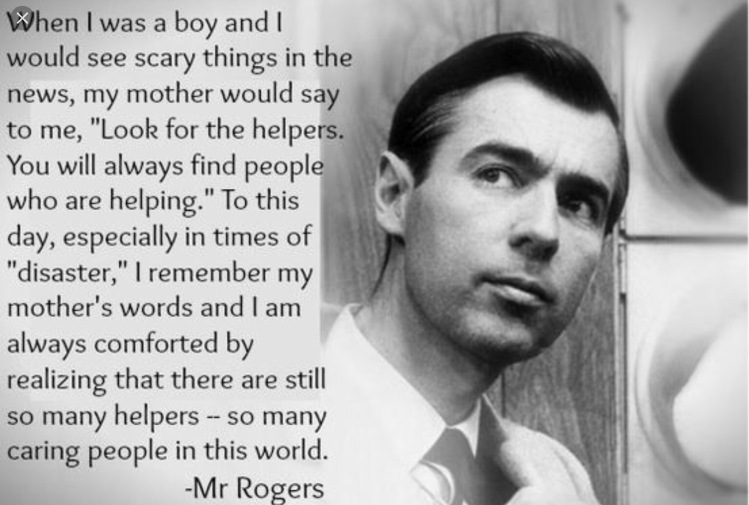 Events have moved on since then and, like all of you, Josie has watched the news in horror these last couple of weeks. She knows all about the Manchester bombing; the twenty two victims, most of them very young; the injured, the bereaved, the suddenly motherless. But she also knows about the helpers.

The helpers are the subject of this assembly.

This is Paula Robinson 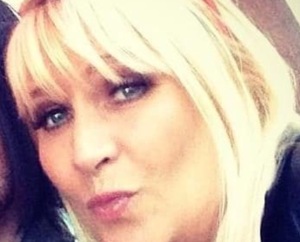 She helped dozens of terrified children to safety after the attack. She hadn’t been at the concert, but was walking past with her husband when suddenly terrified and screaming children poured out of the arena. Paula gathered a crowd of around fifty of them and led them to safety at a nearby Premier Inn. She then shared her number on social media to let worried parents know that their daughters were safe.

Stephen Jones is homeless and was sleeping rough nearby when he heard the blast. 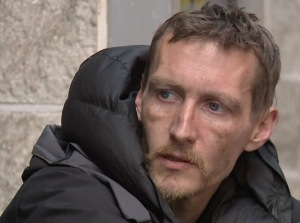 “First there was a bang,” he said. “I thought it was some kind of firework, and then there was a big explosion. I just felt the wind force, and then everyone started screaming and running. Me and my mate we got up and we started running. We realized what had happened, we run back, and all the women and children were coming out with blood.”

Explaining why he ran straight into the danger-zone, not knowing whether there would be a second explosion, Stephen said, “It was children, a lot of children with blood all over them, crying and screaming. If I didn’t help, I wouldn’t be able to live with myself for walking away.”

As news of the attack spread, and train stations were closed, locals began offering spare rooms on social media under the hashtag #RoomforManchester. Rebecca Topham tweeted: “I have a sofa, floor, blankets and tea 5 minutes from the arena for anyone in need.” Hundreds of others offered spare beds, settees, phone charging points, food, and lifts home.

Elsewhere, cafes provided free drinks for the emergency services with people taking tea to police at the cordon. Members of the public arrived at the stadium where victims were taken to wait for family members, offering food supplies. 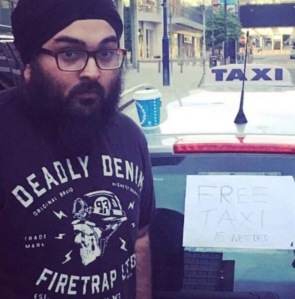 Taxi drivers in the city centre turned off their meters and offered free rides to help victims get home.

Next morning, queues formed outside of blood donation centres in Manchester after the NHS put out an emergency call for new supplies. Give Blood NHS was eventually forced to shut down registration because it had been so overwhelmed by donors that it filled its banks to capacity.

That evening, thousands of people from every part of Manchester packed Albert Square to remember the victims and send a message of defiance. The square was as full as the eye could see as masses turned out to show their solidarity.

There was a huge outbreak of applause as the great and good on the steps of the town hall were joined by youngsters from different community and faith groups and the Lord Mayor of Manchester said the thoughts of the whole city were with those affected. By Friday, a fundraising campaign was generating donations for victims through the hashtag #muslimsformanchester and a walk for peace through the city was organised by Jamia Mosque.

This show of unity is as far from the outcome that Isis terrorists would have been seeking as it is possible to get. That’s why it was so very important. Those murderous bandits despise our modern, multi-racial communities.They want Muslim people to feel loathed in their European homes and driven to join them in Syria. They want them to feel that they have only one true home – within so-called ‘Islamic state’. They want our western countries to become fearful, closed, authoritarian societies. They want us to divide and become weaker, less tolerant, less together – they want us more like them.

Every individual who does something to ensure they fail to achieve this evil aim is a helper. Manchester has reminded us that we are a great country of helpers.

There are a small number of haters too, though. People who give the terrorists exactly what they want. Manchester police report that there has been a doubling of Islamophobic hate crimes in the city since the bombing. Whilst social media was dominated by helpers, haters also used it as a platform for their lazy and toxic prejudice.

Nobody works harder to challenge hate than Brendan Cox, because he knows where it can end. His wife Jo was murdered in the street by a white supremacist, about this time last year. An MP, Jo campaigned for racial tolerance and used her maiden speech in parliament to celebrate all that the UK has gained from its racial diversity. She said, ‘We have far more in common with each other than that which divides us.’  It was for this belief that she was fatally stabbed on her walk to work by a cowardly, far-right thug.

In a series of tweets after the Manchester bombing, her widdower, Brendan, stressed the importance of unity. He wrote, “The pain these attacks inflict is profound & real, it lasts long after the headlines have moved on. But the cause they seek to advance is going to fail. They try to divide us. But we will not divide. We will pull together & live our lives. Britain will respond as it always does under attack: with love for the bereaved, unity & resolve. They will not change us. They will not win.”  He added, “People who use this to push hatred are doing exactly what the terrorists want. Division & hate make us weak, unity & resolve make us strong.”

If anyone has the right to respond to an atrocity with anger, to lash out in rage, it is surely the bereaved. Yet consistently we find that the most eloquent voices for reason, inclusion and love belong to those who grieve the loss of loved ones. These are voices that must be heard by us all with the deepest, most humble respect.

This assembly finishes with some of the most haunting, heartbreaking, brave and beautiful words that I think a human being ever spoke. The love of Antoine’s life was killed in the 2015 Isis attacks on Paris. Like the young people of Manchester, she was at a gig. Somehow, only days later and in the shock of grief, Antoine was able to say this: