A couple of weeks ago, the DfE published the outcomes of a longitudinal study of health and wellbeing. It reports that one in every three adolescent girls in the UK is suffering psychological distress. Just a week later, The Good Childhood Report from the Children Society and The University of York warned of a sharp increase in unhappiness amongst girls over the last five years. Body image worries were identified as a key underlying cause. The past decade has seen a 172% increase in the number of teenagers hospitalised for treatment of anorexia.

From The Good Childhood Report, 2016

As it happens, I’m the mother of three girls and the grim 1 in 3 statistic is reflected in my own experience, so I need no convincing. But it seems others do. In this Daily Mail take on the data, Sarah Vine excuses herself from any “self-flagellating” concern on the grounds that “asking a fourteen year old girl if she’s unhappy is a bit like asking a dog if it would like to go for a walk.” Similarly, Ella Whelan’s research free piece tosses aside the University of York evidence, breezily concluding, “So girls. Ignore the panic: There is really nothing wrong with you.”

Elsewhere on EduTwitter, a return to the debate about the appropriateness of the term ‘crisis’ to describe the current state of teenagers’ mental health is triggered.

Many of us are pretty clear about our position within this debate, incidentally. If, like me, you have spent desperate days searching the Internet because your child was referred to CAMHS six months ago and you’re still waiting to hear; if your 8 year old runs away from the tea table, sobbing (you’re trying the Maudsley approach now); if you’ve spent just one night lying next to your wasted first-born to hear her breathing, because that’s the state you’re in, then you will have no problem whatsoever with the use of the word ‘crisis’.

The horrible reality is that mental illnesses tend to entrench without timely intervention; the adolescent’s fantastically plastic brain is now no longer a promise but a curse as insidious schemas extend and strengthen. So when young people are denied the help they need when they need it because supply cannot meet demand, then that is a crisis.

A Lightning Review of CAMHS provision was commissioned by the Children’s Commissioner and published in May 2016. It highlights the scale of the waiting time problem: 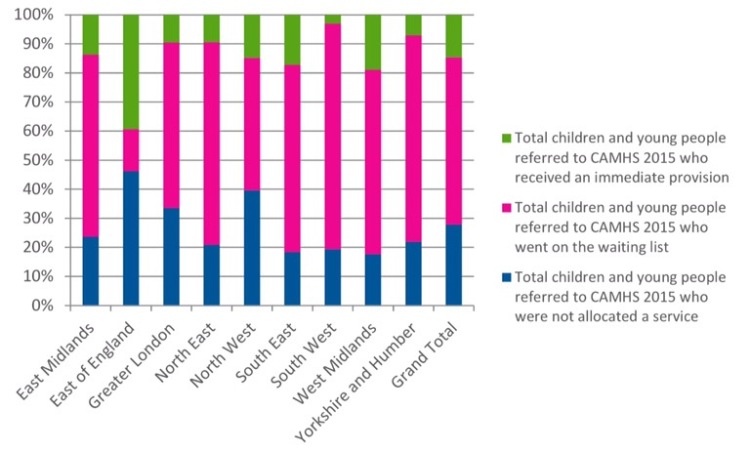 How to respond to this crisis – not whether or not we should call it one. That should be our focus. What we can do right now, as parents and as educators, to make things better for our young people.

There is so much more that we could be doing in our schools – to promote resilience and wellbeing and through this to reduce the need for CAMHS, which isn’t a silver bullet anyway. I’m not referring here to the Duke of Edinburgh style character building favoured by Nicky Morgan either. It’s explicit teaching about mental as well as physical health, focused on prevention, that we should be providing.

One of the things that kept me going through the hellish period alluded to above was a body confidence strategy I introduced at school. When an eating disorder moves into your home, you become acutely aware of how pervasive the pressure to be perfect is because of course you are trying to keep all of those pressures out. But you can’t – because they’re everywhere. And that’s when you fully understand the scale of the problem and the importance of teaching resilience.

I plundered the Dove Self Esteem Project for resources, wrote a PSHE unit on body image using contemporary news stories as stimulus for discussion. Simply teaching students that there are three genetically determined body types was important. That less than 10% of us are ectomorphs and we can’t attain a frame that isn’t the one we we’re born with without Photoshop – or malnutrition.

In subsequent Head Boy and Girl interviews, what we heard time and again was, ‘We need more of this; it made me think completely differently about appearance; the body confidence stuff has really helped me’. If you listen to the poetry our students wrote as part of this campaign, you will note the strength of their engagement:

But we need to begin such work years before children begin their secondary school careers. A 2012 report from the All-Party Parliamentary Group (APPG) reveals that girls as young as five are worrying about their size and looks, and one in four seven year old girls has tried to lose weight. Facts that were reflected in a Twitter discussion recently:

It is clear that we must empower girls to challenge that thin ideal which is the cause of so much Western misery, which stops them from participating in activities like swimming and even putting their hand up in class, according to researchers. At the same time, we must teach them to embrace what makes them unique and to cherish individuality in each other.

My sister, teacher @jopipbenson, runs a lunchtime ‘squash club’ for KS2 girls. It aims to raise awareness and boost self esteem. Her girls have learned about how their bodies will change in puberty when it’s natural to store fat for an adolescent growth spurt; they’ve  laughed at the absurdity of that infamous ‘beach ready body’ campaign; they’ve dicussed the vast range of businesses that make money by ensuring that women hate their bodies; Photoshop – they know that perfection is a lie.

Parents are grateful, some have written in to say so, and why wouldn’t you be? I wish my girls had been to a squash club, back in those blissfully ignorant before anorexia days. I wish I had been more aware. Which is exactly why we can’t leave this education for mental health (with body image just one example of a full wellbeing curriculum) to parents. It’s too important for hit and miss.