“Her eyes twinkled, like the moustache of a man with a cold.”

“Their love burned with the fiery intensity of a urinary tract infection.”

“She grew on him like she was a colony of E coli and he was room temperature Canadian beef.”

These ‘Actual Analogies Used by Students in English Essays’ might not be authentic but they certainly amuse and that’s because the reader is confronted with a car-crash of incompatible connotations. Whilst most students avoid anything quite this inept, we do know as English teachers that tuning into connotative meaning can be difficult for many of them and when this is the case both writing and reading skills suffer. This is never more evident than in the English Literature exam hall, at both GCSE and A level. Year after year, chief examiners complain, often through sighing, sardonic humour, about the ‘naming of parts’.

It’s worth reflecting on whether we are emphasising the right things in our teaching of poetry. Students need some technical vocabulary, of course they do, but a glossary should never be confused with a solid conceptual framework. Later in this post I suggest a straightforward strategy, which students should also take with them into the unseen element of the exam, as the basis for genuine interpretation.

This is the level of engagement that pleases examiners. By contrast, here’s what they have to say about some particularly troublesome examples of device-spotting in candidates’ scripts.

There was still considerable faith in enjambment’s protean qualities; it was variously credited with allowing a poem to flow, to speed up and slow down lines, to convey a wide variety of emotions, and to assist prose writers to create a variety of effects.

Naming parts, or attempting to, is what candidates resort to when they lack the confidence to simply comment on the impact of words. In this way, technical terminology tends to detract from genuine engagement with text. The takeaway message from many an examiner report is therefore to ‘keep it simple’. Here’s our frustrated OCR friend again:

The almost ubiquitous “juxtaposition”, apparently and wrongly believed to mean exactly the same as the humbler, two-syllabled “contrast”, is an unwelcome term, used, presumably to confer a Latinate form of distinction on responses.

This is Part 2 of a blog about teaching the anthology so it sticks, using ‘chunking’ and ‘elaborative rehearsal’ (grouping) techniques that are proven to strengthen memory. In Part 1, I applied the strategies to Wordsworth’s Prelude, demonstrating their potential to help students recall its structure in a closed book exam. Moving onto Wordsworth’s use of language now, I explore how the same grouping strategies can be deployed to sharpen a student’s ear for the connotative power of words whilst at the same time aiding retention of those words for later retrieval in an exam room – so that genuine analysis can be undertaken.

Clearly, students need to understand that connotation refers to the reactions and feelings that a word evokes, beyond its literal – or denotative – meaning. The word ‘home’ refers to where we live, but may connote security, love, family, comfort. The word ‘modern’ denotes recent times but can connote ideas about being new, up-to-date, experimental. ‘Grey’ is a colour made from back and white, but what might it also connote?  Before analysing connotative meaning in The Prelude (or any other poem for that matter), it’s worth reminding students that they do know this stuff, if only intuitively.

An activity around team names is likely to convince them of this. We can demystify a key concept in literary appreciation by applying it to the familiar, non-threatening world of sport. Further, by activating students’ prior knowledge, we provide them with a hook on which to hang their new learning about poetic expression – so that it sticks. 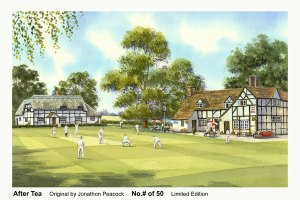 Those of us who don’t follow the modern game associate cricket with long summer days, afternoon tea, the village green, gentle applause, warm beer. There’s evidently been a rebranding in recent years, however. It’s no longer the ‘baseball on Vallium’ that Robin Williams famously described but a sport packaged in imagery connoting energy, speed, strength, aggression! This is reflected in the names of T20 cricket sides. Below is a list of them and as a quick starter we could usefully ask students to draw a series of circles and write inside these the team names that connote the same attributes. Some might be duplicated, of course, since a word can connote more than one idea.

After justifying their groupings, students could then go on to coin an original T20 team name, perhaps for their local town, explaining its positive connotations to the class.

Consolidation activities like these are essential because, as I now go on to explain, a focus on positive and negative connotation is a fail-safe starting point for fruitful literary analysis – as opposed to futile device-spotting.

Back in the day, Practical Criticism by John Peck and Martin Coyle, guided me through many a lit crit at uni – I’m delighted that it’s still in print! It offers wonderfully uncluttered, clear and incisive advice. It’s also the source of the conceptual framework I allude to above and what I do now is simply graft onto the guidance some memory-friendly pedagogy. 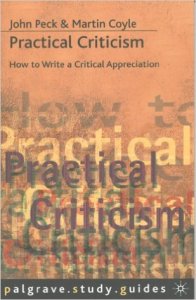 Peck and Coyle maintain that successful literary analysis sees the wood for the trees; manages to identify the larger significance of a work – its ‘issue’. It doesn’t simply comment on the effectiveness of a description. Clearly, Wordsworth wanted to do more than paint with words a dramatic landscape in his ‘boat-stealing’ episode of The Prelude. Peck and Coyle maintain that we must identify the conflict or tension within a work because this will then reveal its central ‘argument’ or significance. Here’s how they recommend we set about this:

Familiar with the notion of positive and negative connotations, students should be able to colour-code the words which create tension within The Prelude without too much difficulty  – especially if the first few lines are modelled for them, as in this example:

One summer evening (led by her) I found
A little Boat tied to a Willow-tree
Within a rocky cave, its usual home.
Straight I unloosed her chain, and stepping in
Pushed from the shore. It was an act of stealth
And troubled pleasure, nor without the voice
Of mountain-echoes did my boat move on,
Leaving behind her still, on either side,
Small circles glittering idly in the moon,
Until they melted all into one track
Of sparkling light.

As students continue through the extract, perhaps discussing it in pairs, they will see the negative colour beginning to predominate – this visual representation of the poem’s darkening mood more likely to lodge in memory than any merely verbal exploration.

However, in order to quote the words that create this shift in mood, students will need to commit some of them to memory – which is where a return to ‘grouping’ strategies is invaluable. They should write the individual words on post-it notes and then split their set into sub-categories of related words, just as they did with team names. If prompting is required, then using the senses to classify is generally productive.

To bring the poem’s central tension into even sharper relief, though, learners should be challenged to organise related words into contrasting pairs, such as:

They should then practice retrieval from memory by looking at just one phrase and using this to recall its contrasting pair – as many times as is necessary for them to work through the set without error.

Finally, returning to Peck and Coyle, we need to consider how to draw out the general themes from these particular examples. By asking students to look for patterns, of course, we have already nudged them in this generalising direction. They are likely to spot the emphasis on scale, for example, and they will be able to infer from this the boy’s sudden and terrifying awareness of his insignificance in the scheme of things. The annihilation of the childish ego. Such insight acts as a key with which students can unlock any detail in the poem – each will contribute to one side or other of the poem’s tension, its ‘issue’. Furthermore, this big picture, actively created by the learner rather than passively received, will be retained. 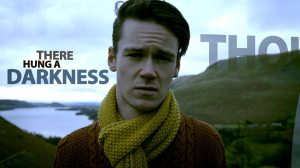